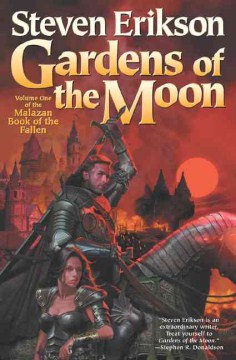 Gardens of the Moon

Having caught up on most other grimdark fantasy reads, I was curious after hearing so much about Steven Erikson's wildly popular Mazalan series. As other reviews have stated, the writing style of this series is daunting at first. You're introduced to a number of characters lands and lore right from the beginning without much explanation. It isn't vague in its explanations, it's just the reader arrives in the middle of an ongoing story, and you have to keep reading as the exposition naturally unveils itself. There's a short character and land encyclopedia at the beginning and end of the book but I wouldn't bother with it. There are too many names to bother remembering without the context given in the story. The short of it is the Mazalan Empire recently experienced a regime change, where it's founding mage emperor was deposed and executed by his chief spy (and consort?). She has continued it's aggressive expansion while clearing out those loyal to the old guard. The next target is a rich, gas-powered city run by a secret cabal, in the midst of a quiet coup of its own. As all this happens, the gods choose mortals to work through for their entertainment and rivalries. Mazalan has an amazing lore and is filled with interesting character, including my new favorite 'rogue knight' character, Anomander Rake. I can't wait to continue the series.

A differnt style, a different world... and a immensely good start to a profoundly satisfying series... I do believe, my favorite series to date. *Not for the novice fantasy readers...*

Ultimately a fulfilling read. The writing style, including not only the prose but also including the content or information conveyed by the prose, was not inviting to me and was not easy for me to get into as I began reading the book. It took me until at least page 150 (in a full-size volume approximately 500 pages long) to become familiar with what was going on and what the characters were up to, and to acquire a sense that I 'belonged' as a spectator to the events. Once that happened, the book became very good - one of the best epic fantasy beginnings that I've read.

Review on my blog at navigatingneverland.org

Garden’s of the Moon is one of the best fantasy books I have read! It is right up there with George R.R Martin’s, A Song of Ice and Fire series, as well as Glen Cook’s, Chronicles of the Black Company. I can’t wait to read the rest of the series!, however this book could easily stand alone, but you will be wanting more!

Garden’s of the Moon is by no means an easy read. It takes a lot of time to get through the book and even when you are 3/4 of the way done, you still may be confused. There are just so many plots, characters, races, and places it is hard to keep up with it all. I found myself looking at the character list as well as the glossary during every chapter. It did take me over 100 pages to get into it, but I am glad I stuck with it. I was constantly confused. I had to look up chapter summaries just to make sure I wasn't missing anything. Turns out you really aren't supposed to know what is going on from the beginning.

Erikson’s book is definitely plot driven and complicated. As you read you will be confused, but there are clues that can help you understand. You have to figure it out based upon conversations and actions. Who is fighting who and why? This is what kept me interested! I wanted to know why! Most of the questions are answered by the end of the book, so I wasn’t confused too much after finishing it. :) Just read slow and look at the provided glossary as you read and you will enjoy it!

I couldn't believe the world that Erikson built for his book! There is tons of history spanning over 1000 years, as well as hundreds of different places, people, and races. It is so incredible, vivid, and well described! There was enough detail provided that you could picture it, but not so much that it drags on forever. Erikson chooses his words very carefully; there is no filler in this novel!

I couldn’t believe how well the battle scenes were described! I felt like I was actually there. There were also instances where you get descriptions about the aftermath of some brutal battles and I was just disgusted. I felt like I was walking through the scene just as the character was.

The only downfall of the novel, besides it being confusing, were the characters. Erikson’s novel is so plot driven that he leaves little room for character development. There are just so many characters to begin with that are important in the novel, I wouldn’t know where to begin! I felt like I just couldn’t connect to any of the them, which makes the book a little less interesting for me. However, I was distracted by trying to figure out the plots, so I’m to too upset over the lack of character development. I can’t say that the development was horrible, it just wasn’t as good as I expected, though there are many other books to the series, so maybe it gets better.

Unlike most novels where you have good vs. evil, in this novel that is rather difficult to determine. It seems like there is just a lot of gray areas, which is a good thing in my opinion. Makes things a little more real. No one is solely good or bad.

I can’t even begin to explain the magic system in the book, and neither does the author. You have to figure it out as you read. I don’t want to give it away because that is the fun of reading this book, but I can say that it is very interesting and different than a lot of other novels!

If you are looking for a book that is not filled with the typical fantasy cliches, is really plot driven and complicated, and you like to think quite a bit when you read, then I would definitely read this book! Even if you don’t like these things I would still suggest giving it a try. I don’t like books that are confusing, but I have to say that I really liked reading something different and trying to figure out what was going on as I was reading.

Great start to a better series.

This, the first book in the series, lets the reader know just how complex the world created is. Lots of half storylines, intriguing questions, characters that come and go. The series, to me, has been the most satisfying and interesting fantasy I have ever read--I am sure none will measure up. Still, I would recommend reading with a friend because of the questions that arise. I read the series with my son and some friends of his which led to hours of great conversation. Erikson has no compunction about killing off main characters, so be prepared for some you love to perish.
This first book is not the best in the series--and all the stories don't come together until well into the books--but it is very good. I am reading it for the second time and much has become clearer.

Not my favorite, but a good intro to the Malazans.

A good beginning to a great book series.

This first book can be confusing at times, however this is what the author was going for. You are dropped into a rich world full of history, not unlike if you were to dropped into the middle of another country today.

Well worth the read.

all i could think was..."wait what??????" extremely confusing and i love reading challenging books. this was information overload

“Words are like coin—it pays to hoard."
"Until you die on a bed of gold," Paran said.”
― Steven Erikson, Gardens of the Moon

“Tell me, Tool, what dominates your thoughts?'
The Imass shrugged before replying.
'I think of futility, Adjunct.'
'Do all Imass think about futility?'
'No. Few think at all.'
'Why is that?'
The Imass leaned his head to one side and regarded her.
'Because Adjunct, it is futile.”
― Steven Erikson, Gardens of the Moon

“Every decision you make can change the world. The best life is the one the gods don’t notice. You want to live free, boy, live quietly.”

Miriwen thinks this title is suitable for 18 years and over

Baharak thinks this title is suitable for 10 years and over