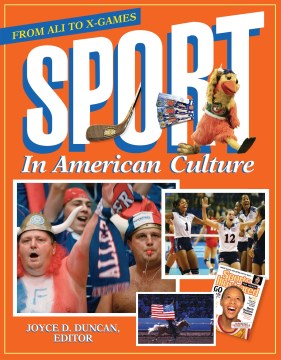 From Ali to X-games

A unique and timely exploration of the cultural impact of sport on American society, including lifestyles, language, and thinking.

A unique and timely exploration of the cultural impact of sport on American society, including lifestyles, language, and thinking.

Sport in American Culture is the first and only reference work to provide an in-depth and up-to-date exploration of sport and its impact on American culture. Essays from more than 200 scholars, professionals, and sports enthusiasts address how sport has changed our lifestyles, language, and thinking.

Arranged alphabetically, the work introduces key sport figures and national icons, with a focus on their cultural impact, examines individual sports and how they have influenced society, and discusses such phenomena as the billion-dollar athletic apparel industry, sport as big business, and the effect of sport on gender, racial views, pride, and nationalism. In addition to expected topics, the work also includes less studied areas such as myths, audience rituals, Wheaties, comic books, the hula hoop, and religion.

• 400 A–Z entries covering a wealth of topics, including sports heroes, artifacts of sport, culture of consumption, racial discrimination, and gender

• 200+ distinguished contributors, including academics and professionals from a wide variety of fields

Book News
In actuality, the approximately 400 entries in this encyclopedia run from Hank Aaron to Mildred Zaharias, but the selection of Muhammad Ali and the "extreme sports" X Games for inclusion in the subtitle highlights the volume's emphasis on the broad cultural impact of sport; these entries cover Ali's membership in the Nation of Islam and his opposition to the Vietnam War, and X Games' relationship to the cultural place of "Generation X." Other representative entries included by Duncan (managing editor, Sport Literature Association) cover apparel in sport, the Army-Navy sports rivalry, athletes and the law, sport as big business, the Black Sox scandal, Frisbee, the stereotype of dumb jocks, "Casey at the Bat," gambling, martial arts films, racial discrimination in sport, and fan behavior. Annotation ©2004 Book News, Inc., Portland, OR (booknews.com)