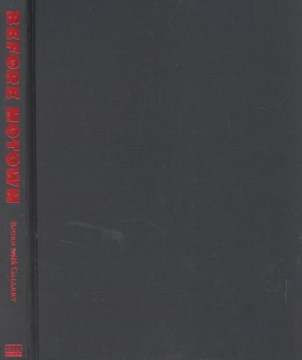 Baker & Taylor
Provides a history of jazz music and documents the careers of a variety of jazz musicians in Detroit from 1920 to 1960.

University of Michigan
The history of Detroit jazz comes alive with remarkable photographs, advertisements, and interviews
When most people think of Detroit and music, they think of the Motown sound. But what many people forget is that Detroit has a remarkable jazz history, which became a major influence in what came to be known as the Motown sound.
Before Motown is the first book about the history of jazz in Detroit. It shows the significant impact Detroit has had on the development of jazz in America, with its own sound, distinct from that of the other jazz centers of Chicago, New Orleans, St. Louis, or Kansas City. Starting with the big bands in the 1920s,with groups like the McKinney's Cotton Pickers and Jean Goldkette's Orchestra, and continuing into the 1950s, Detroit experienced a golden age of modern jazz centered around clubs like the Blue Bird Inn. That jazz scene comes alive in interviews with musicians and club owners, combined with unique period photographs and advertisements. In addition, Detroit's vital jazz scene is placed in its social context, particularly within the changing relations between blacks and whites at the time.
Long overdue, Before Motown tells the story of Detroit jazz as it really happened, told by the people who lived it. More importantly, it shows how life can mirror art in the most pragmatic of American cities, Detroit.
Lars Bjorn is Professor of Sociology, University of Michigan, Dearborn, and the author of numerous articles and publications about jazz. Jim Gallert is Vice President of the Jazz Alliance of Michigan and a veteran jazz broadcaster. He has been involved with the Detroit jazz scene for over twenty-five years.