Saved Searches Advanced Search
We offer Curbside Pick-up at the Downtown Library while our libraries are closed. To learn more and find online events, go to www.redwoodcity.org/library
Print 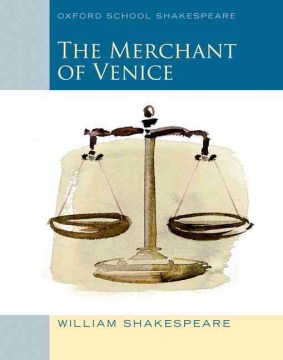 The Merchant of Venice

About the Series:
Newly redesigned and easier to read, each play in the Oxford School Shakespeare series includes the complete and unabridged text, detailed and clear explanations of difficult words and passages, a synopsis of the plot, summaries of individual scenes, and notes on the main characters. Also included is a wide range of questions and activities for work in class, together with the historical background to Shakespeare's England, a brief biography of Shakespeare, and a complete list of his plays.

This is the first Shakespearean work that I read, and the main reason I chose this one was because of its business oriented story, unlike his other classic tragedies. The story itself, adjusted to "temporal" inflation, is just brilliant! I'm not going to mention any of the extreme anti-semitic sentiments in the book which is downright deplorable even in that time and place, because I largely focussed on the aspects of business and law. I also want to twist and adapt the three casket story, which is largely based on Christian teachings and beliefs of that era, into a more modern, pragmatic "solve the riddle" kind of story! I guess the casket story's modern equivalent is that feature on many dating apps that ask random questions and then match based on answers :)

With the above things clarified and put out of the way, the rest of the story easily flows as an extraordinary artistic creation blended with a masterful narration which, like a long gushing river, has enough whirlpools to keep the journey exciting and a seamless flow to get carried along effortlessly.

Just like any other Shakespearean work, the book has enough quotes to underline, the most famous of which has to be 'All that glitters is not gold', referring to a literal golden casket. It's interesting how this has been adapted to mean a non-golden thing in recent times, as the original one was way more metaphorical, in that it actually meant gold could glitter but don't be fooled by that glitter! There are also many neologisms in the work, most famous being "green-eyed" to mean jealousy (although I'm not sure the link to the color, green is generally a positive color). Along with that, one of the most famous female names ever, Jessica, also first appeared in this play, mostly from Anglicisation of the biblical Iscah.

Coming to my favorite part of the play - business and law! I guess the only thing missing in this is Credit Default Swaps! The gist is - Bassanio needs money, he asks Antonio. Antonio is a wealthy merchant but his wealth is not liquid. He has tons in ships etc, but none liquid. Think of modern day Fixed Deposits and bonds! But owing to his non-liquid assets, he can give surety for Bassanio with other lenders. So he does, but the surety the lender Shylock asks, is a "pound of Antonio's flesh". Pound as in the weight pound, not the currency! Sigh, if only it was the currency. Bassanio fails to repay, and it all comes down to a legal battle about the validity and morality of "a pound of flesh". The court drama scenes can easily give the makes of Good Wife a run for their money! Eventually, since this is not a tragedy, it all ends well for the "good guy" Antonio. I was surprised there's even an element ofOptions Trading here given the surety's value might fluctuate, but Shylock has already called upon it!

Overall. I thoroughly enjoyed reading the "good" parts of the book, mindfully skipping over all those lines that screams of hatred!

The Merchant of Venice is a well written play with a good few lessons and some jokes but the thing I love most about this play is nobody dies and it has a very happy ending which is somewhat rare from what I’ve experienced reading Shakespearean plays. I also enjoyed the characters very much as Shakespeare didn’t make the women completely helpless as they were usually depicted in the past, instead they solve their own problems and even the biggest conflict in the play which saves a man from being murdered. Overall it’s an enjoyable script to go over with lots of smart riddles and problems but personally it wasn’t my cup of tea and therefore not too memorable but I’m sure others would enjoy it more than I. 2.5 stars
@Celine of the Hamilton Public Library's Teen Review Board

Very entertaining play by Shakespeare. It's not so deep as his tragedies but the plot is comfortably fast and intriguing. This play is very humorous. Portia is a really attractive heroine full of wit and courage.

After reading Merchant of Venice in Grade 10, I could easily say I enjoyed it far more than Romeo and Juliet. Shakespeare’s writing had baffled me in a good way. I was sitting at the edge of my seat reading this book. I found my self excited when reading each act and scene, something I didn’t feel when reading Romeo and Juliet. The plots were interesting, and I found myself rooting for some characters. About the characters, they were written amazingly. I also found this book easy to understand and had no issues when deciphering the writing. I’d highly recommend this book for those who like Shakespeare or for those who enjoy reading old works of literature. For high school students, don’t be afraid of reading this – some editions come with translations included for an easier read. Rating – 5/5. @average_bookworm of the Hamilton Public Library Teen Review Board

Literature is honestly so underrated sometimes. I do find that with reading Shakespeare, it can be difficult to understand/keep up with the play, especially in a timed setting such as a school classroom. If more people took works like this for what they were, and not "difficult works that modern people don't get", there would be so much more positivity and credit given to where it rightfully is deserved. Sometimes though, explaining things (like jokes) ruins its meaning and intent. The same works for this play. It is very elaborate in the way that its four plots (casket, bond, ring, and elopement) connect together. The story flows fluently, and the characters are all uniquely their own. This is truly a work of art. 4.5/5 stars
- @Siri of the Teen Review Board of the Hamilton Public Library

I was forced to read this play in grade nine as part of the English curriculum. To be honest, it took some time for me to truly appreciate and understand the Merchant of Venice. After all, Shakespeare writes in a completely different “language.” Fortunately, I got my hands on a copy of this play translated into modern day text.  After that, I developed a deeper understanding of the characters and the story line. It surprised me that a female character, Portia, was given such an important role, since the play was written in a time where women were uneducated and had little influence on society. By now our culture, beliefs and social norms have changed drastically. So to be able to interpret this play in the 21st century was something that I enjoyed.
- @Vaseline of the Teen Review Board at the Hamilton Public Library

Marvellous play! And the modern-day translation was a lifesaver.

Loading...
RCPL owns a similar edition of this title.