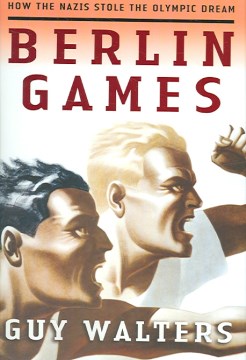 How the Nazis Stole the Olympic Dream

Baker & Taylor
A comprehensive history of the 1936 Berlin Olympics offers a look at the Nazi machine that attempted to use the games as a demonstration of Aryan superiority, while hiding its anti-Semitic and militaristic agenda.

In 1936, Adolf Hitler welcomed the world to Berlin to attend the Olympic Games. Visitors from all over the globe came to see not only a magnificent sporting event, but also a showcase for the newly rebuilt Germany. No effort was spared to present the Third Reich as the world's newest power. Swastikas fluttered next to the Olympic rings from the balconies of freshly painted buildings. Butter was hoarded weeks in advance in order to convince visitors that there were no shortages. There was even a pause in the implementation of anti-Semitic measures. But beneath the surface, the Games of the Eleventh Olympiad of the Modern Era came to act as a crucible for the dark political forces that were gathering to threaten the world.

The 1936 Olympics were nothing less than the most political sporting event of the last century. Far from being a mere meeting of sportsmen and-women, it was an epic clash between proponents of barbarism and those of civilization, both of whom tried to use the Games to promote their own values. Berlin Games is the complete history of those fateful two weeks in August that would foreshadow the bloody conflict soon to come. It is the story of the athletes, from their often humble beginnings to the glory of the Olympic Stadium. It is also an eye-opening tale of the Nazi machine that attempted to use the Games as a model of Aryan superiority and fascist efficiency. Furthermore, it is a devastating indictment of the manipulative figures—including politicians, diplomats, and Olympic officials—who vied for power and glory in different sorts of games whose results would have profound consequences for the world.

Drawing on original research and interviews with surviving participants from all over the world, Walters has produced a history filled with intrigue, sport, sex, and infamy. Berlin Games is a definitive and remarkable record of a time that still fascinates and haunts us to this day.

Book News
British journalist Walters reconstructs the hidden history of the 1936 Olympic games, hosted by the German Nazi regime in Berlin. His narrative focuses on the politics of the games, including how Hitler used the games to promote his ideology within Germany, how African American athletes punctured that ideology with their athletic performances, and how corruption marred the decision-making of officials involved in the games. In the end, says Walters, the book "is about Olympism itself, and how the Games of 1936 saw an ideal marriage between it and Nazism." Annotation ©2006 Book News, Inc., Portland, OR (booknews.com)

Baker
& Taylor
A comprehensive history of the 1936 Berlin Olympics offers a provocative look at the Nazi machine that attempted to use the games as a demonstration of Aryan superiority, while hiding its anti-Semitic and militaristic agenda, and at the politicians, diplomats, and Olympic officials whose own power struggle would have profound consequences for the world. 35,000 first printing.