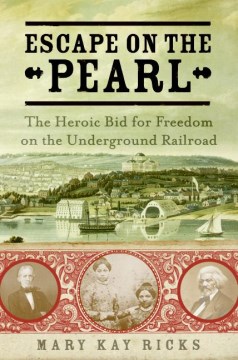 Escape on the Pearl

The Heroic Bid for Freedom on the Underground Railroad

Baker & Taylor
Traces the failed 1848 escape attempt of more than seventy slaves, an event that galvanized the debate over slavery in Congress, in an account that focuses on the freedom quest of teenage sisters Mary and Emily Edmonson.

On the evening of April 15, 1848, seventy-seven slaves attempted one of history's most audacious escapes&;and put in motion a furiously fought battle over slavery in America that would consume Congress, the streets of the capital, and the White House itself. Setting sail from Washington, D.C., on a schooner named the Pearl, the fugitives began a daring 225-mile journey to freedom in the North. Mary Kay Ricks's unforgettable chronicle brings to life the Underground Railroad's largest escape attempt, the seemingly immutable politics of slavery, and the individuals who struggled to end it. All the while, Ricks focuses her narrative on the intimate story of two young sisters who were onboard the Pearl, and sets their struggle for liberation against the powerful historical forces that would nearly tear the country apart.

After a terrifyingly calm night, the wind came up as the sun rose the next morning, and the small schooner shot off down the Potomac River. Hours later, stunned owners&;including a former first lady, a shipping magnate, a former congressman, a federal marshal, and a Baptist minister&;raised the alarm. Authorities quickly formed a posse that chased the fugitives down the river. But with a head start and a robust wind that filled their sails, the Pearl raced ahead&;unaware that a violent squall was moving into their path and would halt their bid for freedom.

Escape on the Pearl reveals the incredible odyssey of those who were onboard, including the remarkable lives of fugitives Mary and Emily Edmonson, the two sisters at the heart of the story, who would trade servitude in elite Washington homes for slave pens in three states. Through the efforts of the sisters' father and the northern "conductor" who had helped organize the escape, an abolitionist outcry arose in the North, calling for the two girls to be rescued. Ultimately, Mary and Emily would go on to stand shoulder to shoulder with such abolitionist luminaries as Frederick Douglass and attend Oberlin College under the sponsorship of Harriet Beecher Stowe.

A story of courage and determination, Escape on the Pearl revives one of the most poignant chapters of U.S. history. The Edmonsons, the other fugitives of the Pearl, and those who helped them can now take their rightful place as American heroes.

Baker
& Taylor
Traces the harrowing and failed 1848 escape attempt of more than seventy slaves, an event that threw Washington, D.C., into turmoil and galvanized the debate over slavery in Congress, in a narrative account that focuses on the freedom quest of teenage sisters Mary and Emily Edmonson.